Ok, so not very therapy orientated, but I'm not just a therapist! 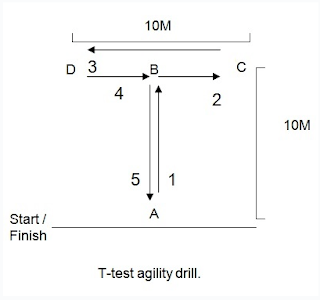 An interesting agility drill for rugby. I think it might be good for tennis players and other racket sports too.

I have another drill I picked up from a tennis website that uses two cones around which you shuffle in a figure of eight. With this drill you always face forwards so you have to use small side-steps as well as forward and backward movements.

I sometimes do it using the tramlines as a guide during a warm up routine. This rugby drill could be done using the baseline and service line. Although I might adapt it if I thought running backwards on a hard court was dangerous!
Posted by Richard at 10:15 No comments:

Are all athletes healthy?

There was an interesting little piece in The Times today (May 18th 2015) about the incidence of heart issues in elite athletes. The headline was a bit alarming, suggesting that thousands of athletes are at risk of a serious heart problem. When you get into the statistics a study of Italian Olympic aspiring athletes found around 7% had some sort of heart problem that was potentially life limiting. Taking the figures another way, it has been suggested that had screening been used to stop participation, a large number of athletes might well have been prevented from taking part.

Now this is serious stuff. Who can forget the scenes a few years ago in the Premier League when Fabrice Muamba collapsed and the recent news of the death of a footballer in Europe and a rugby player here in the UK. So any move to increase both awareness of conditions and applying a rigorous testing process for high level athletes in any sport is a bit of a no-brainer. The big question is at what point do you actively intervene and stop someone playing or taking part?

As a club therapist at a fairly low level of competitive rugby (we just got promoted to tier 7 if I've got my league structure correct), I wonder what we can do to help our players be as aware as possible of their health. Even a very simple screening process including body fat% and blood pressure might be a worthwhile procedure.

The thing is, we might well do a fitness test at the start of pre-season training and measure it again as the season progresses, but being fit does not presume being healthy. The two can even be mutually exclusive.

The article in the paper is a timely reminder that we should take health in sport just as seriously as we should be taking it in everyday life. Personally my hope is to be as fit and as healthy as I possibly can be for as long as I can be.
Posted by Richard at 17:14 No comments: