There are lots of self-help massage products around from foam rollers to spikey balls. There are home-made solutions too from tennis balls taped together to bits of drain pipe used in place of a roller! The latter doesn't bear thinking about for me but some people who like pain seem to enjoy rolling around on them.

As a therapist I know that not everyone wants to spend a lot of money on paying someone to treat them, so knowing about what devices for self-massage are out there and how to get the best out of them seems to be a good idea to me. That way I know what my clients are trying to do and I can advise them appropriately.

The Omni Massage Roller consists of a solid ball that rolls freely inside a cup. There is a hole in the cup through which you can pour massage lotion to aid the glide of the roller. There's a band around the cup for a sound grip.

Because the contact area between the ball and the soft tissue is quite small, it's quite easy to overdo the pressure. Having said that, used well it can be very precise. That it turn suggest to me that you need to know what you're trying to do with it to get the best out of it.

The advantage of the roller over a simple ball is the ease with which you can move it around compared to lying on a tennis ball for example. Of course the downside is that creating pressure can be difficult and even potentially bad for you if you're trying to apply leverage through your arm, shoulder and wrist.

I paid £8.99 for one from FirstAid4Sport, but they are also available from the likes of Amazon.
Posted by Richard at 14:22 No comments:

It's been a busy few weeks what with one thing and another. I went to the COPA Practice show again this year. Much the same as year as far as I could tell. Some very expensive equipment on show alongside some high-tech stuff too. Beyond that there was enough to make the day worthwhile.

As a result of the show I decided to investigate the Niel Asher Technique for frozen shoulders. I've got a guinea-pig to volunteer for treatment, and will see how it goes. 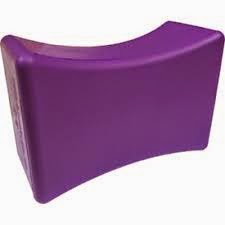 One interesting piece of kit I saw was called the bodyblock. It's a useful looking support tool with a wide range of applications. The surface is wipe clean and the block is soft enough to give under pressure but not so soft that it collapses.

You can get them direct from the website, bodyblock.co.uk.

If you buy stuff from Physique, they are planning to trial stock them in the very near future, or so I'm reliably informed!

Having signed up for the NAT (Niel Asher) cod, I downloaded the files, did the reading and watched the videos. The basic reasoning behind the technique is that frozen shoulder arises from an inflammatory response in the tendon of the long head of the bicep, to put it simply. It's certainly interesting and I'm looking forward to see how it works in practice.

Lastly I went to the SMA Conference on Saturday. A really useful and interesting day. Met a few people I knew and a lot of people I didn't! The venue was good and the talks interesting and informative. In the end I was glad I went.

It looks like I may be working with a local rugby club for the upcoming season. This will be at training and pitchside. I've booked myself on a two-day pitchside first aid course, and while daunting,  it will be good to expand my knowledge and experi
Posted by Richard at 14:03 No comments: